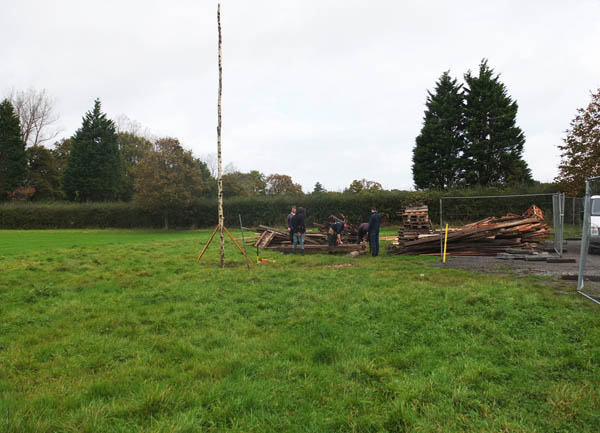 This week end saw the start of East Hoathly's bonfire sculpture. Taking the nation's response to the 100 years since the beginning of World War one

Since 1918 the bonfire commemoration in the village have always focused on remembering our own war dead- from the evening in November in 1918 when the village came together in an impromptu party to celebrate the end of hostilities, a bonfire on the corner made from the butcher's fire wood he had intended to use the next day in his slaughter house, and a fancy dress competition in the back room of the Kings Head- which my own Nanny took part in after loosing her own father to the war a year and a half earlier. Ever since, the weekend of Remembrance has seen the Village Society put on one of the biggest nights in the Sussex Bonfire's calender. The theme of the bonfire sculpture this year can be little else than a memorial to those momentous times 100 years ago. 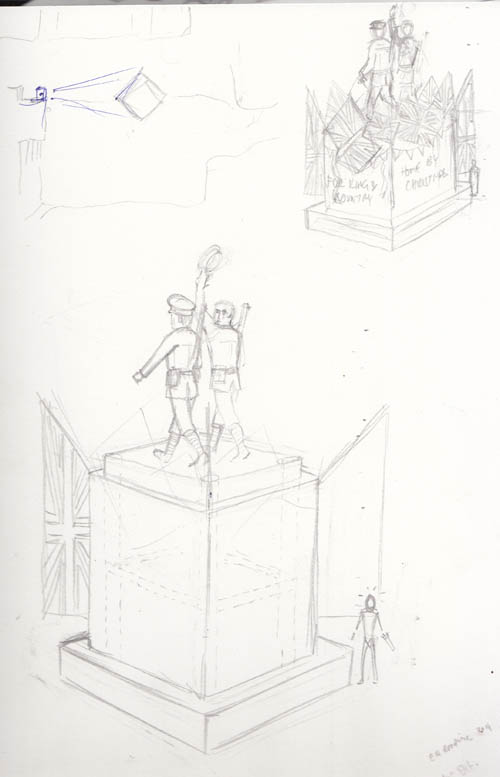 One of my original sketches for this years bonfire - The bonfire will show two soldiers marching symbolically away from the village one with cap raised, waving farewell. They will be set on to a plinth full of the patriotism felt at the time of the beginning of the war. The nationalism, naivety and empire building felt throughout Europe that led the continent and the world into the calamity of the proceeding years. On to the unlit bonfire will be projected the true horror that awaited those troops that weeks earlier had left their homes swept along by the patriotic fervor across the country.

I have three weekends to pull this off! This weekend (18th/19th October 2014) saw us on Saturday gather up the materials to build the fire. On Sunday we started early and traveled to a nearby friends wood (thank you Richard) to cut down the trees that make the four main uprights for the construction. They where then erected on the fire site and we managed to put up the first main lift. 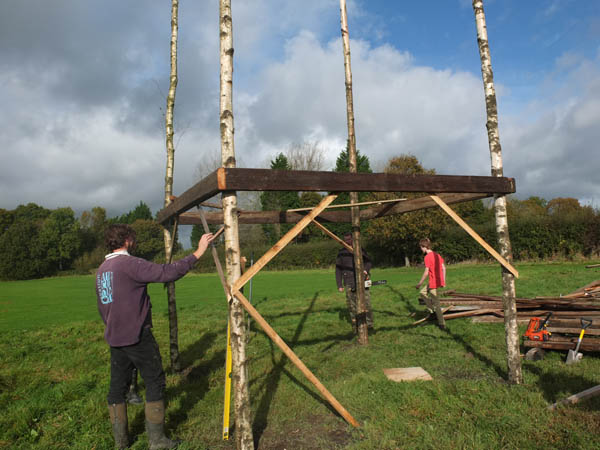 Mike and James laying the floor. With still a huge amount to do we'll get back together next Saturday to carry on. I'll post updates to this blog as often as I can.

Here's a link through to last years bonfire: 'A Box of Frogs'

I was visited by the BBC on Wednesday (22nd) to see what we were up to. We made it onto BBC South East news programme.

Very few of us out today- Mike and I spent yeserday evening making a start on the soldiers for the plinth- I think we've managed to work out how we're going to acheive it. We'll make a proper start on those as soon as we have enough man power.

Today we've added the next lift, strutted and floored it as well as made a start on the cladding. So not a bad day at all- Hoping we'll have more helpers tomorrow.

Here's a link through to a time lapse film of the work today; HERE 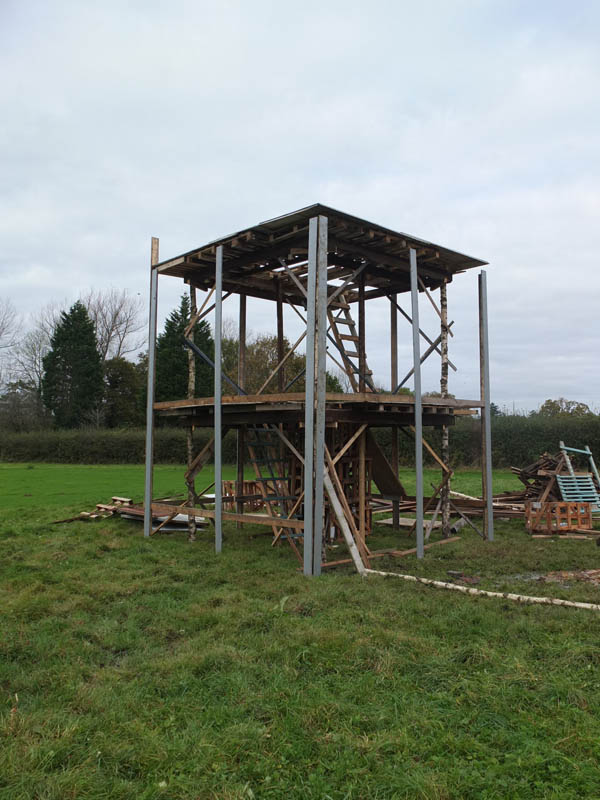 This is how we left the fire this afternoon 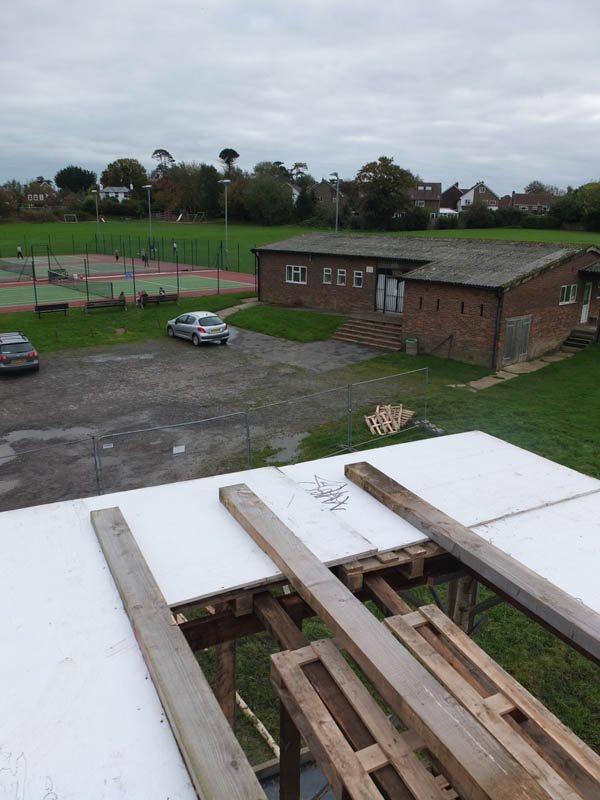 An unusual view of the village!

A very disappointing turn out this Sunday- still we still made some good progress. The sides are now almost entirely clad. 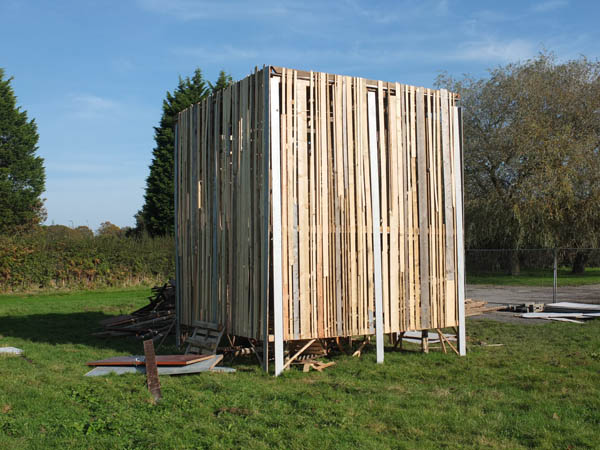 So I guess if all else fails- we've got another cube this year! 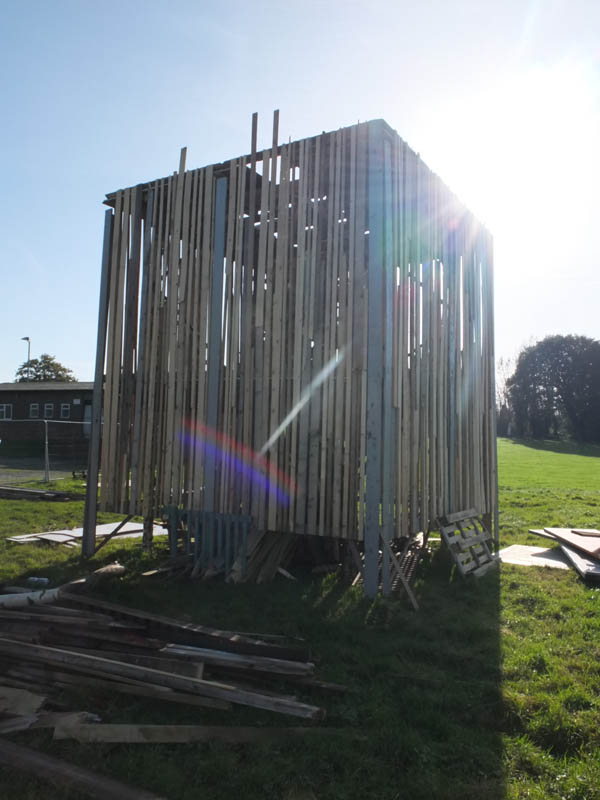 I'm looking forward to this weekend, I'm sure we'll have decent numbers out this weekend- and we can crack on and make some good progress.

An absolutely fabulous turn out from everyone today saw some much needed progress on the bonfire. Unfortunately it was so busy I didn't have time to take any photos of all the helpers- see how many you can count in this time lapse video of the build HERE (also spot my naughty nephew and friends turning off the camera.....he asked how I knew it was him!).

Here's a few from later in the day 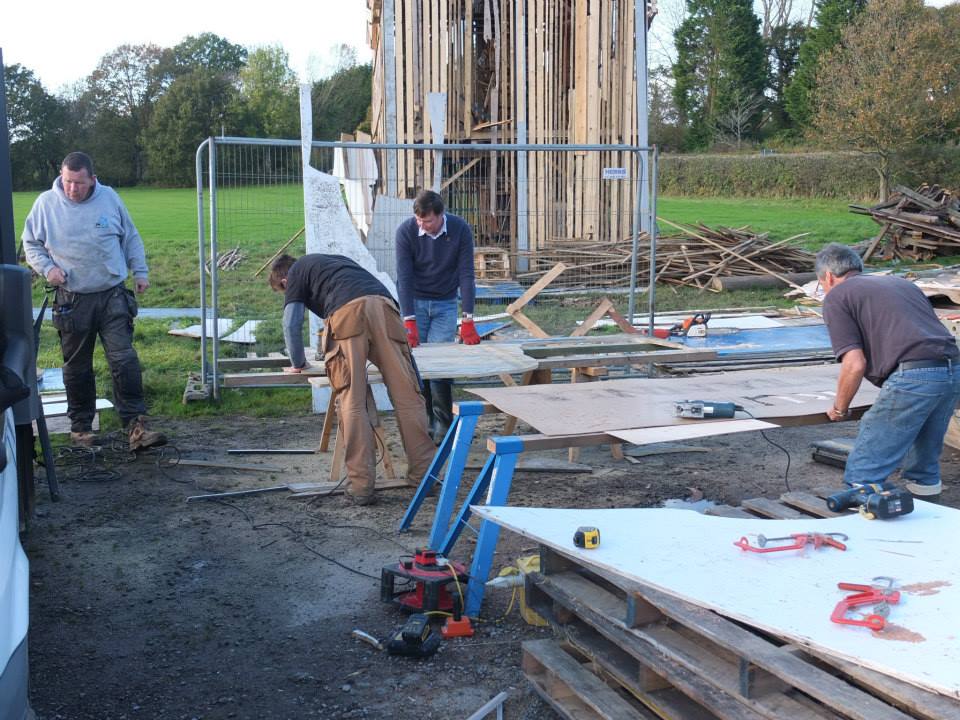 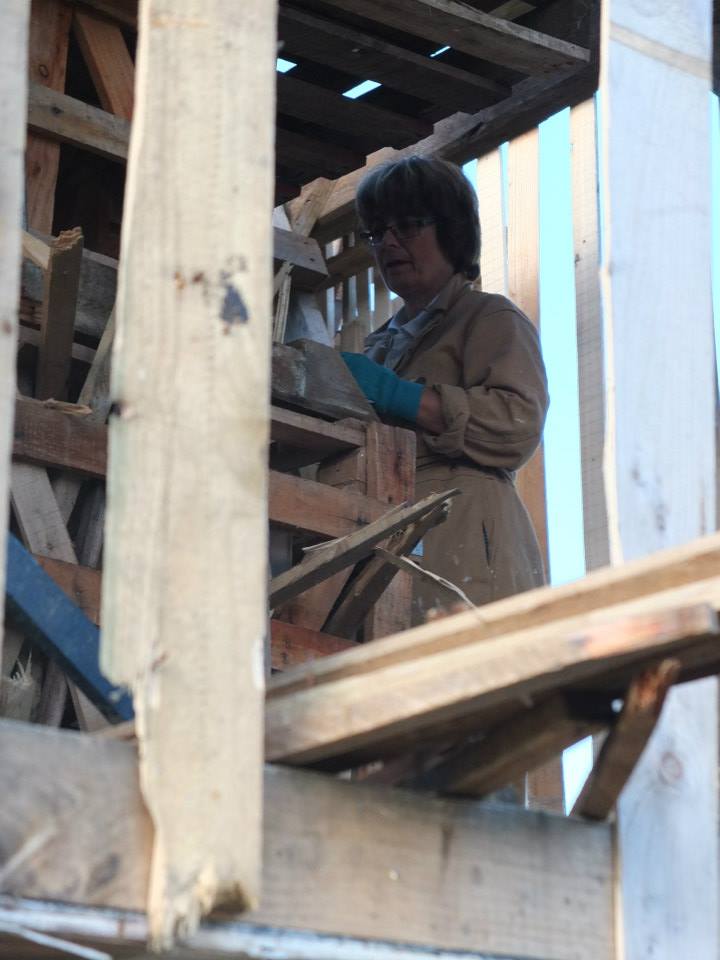 Julia doing a stirling job on the central chimney- this will ensure the men on the top are consumed by the flames before the integrity of the fire is weakened. 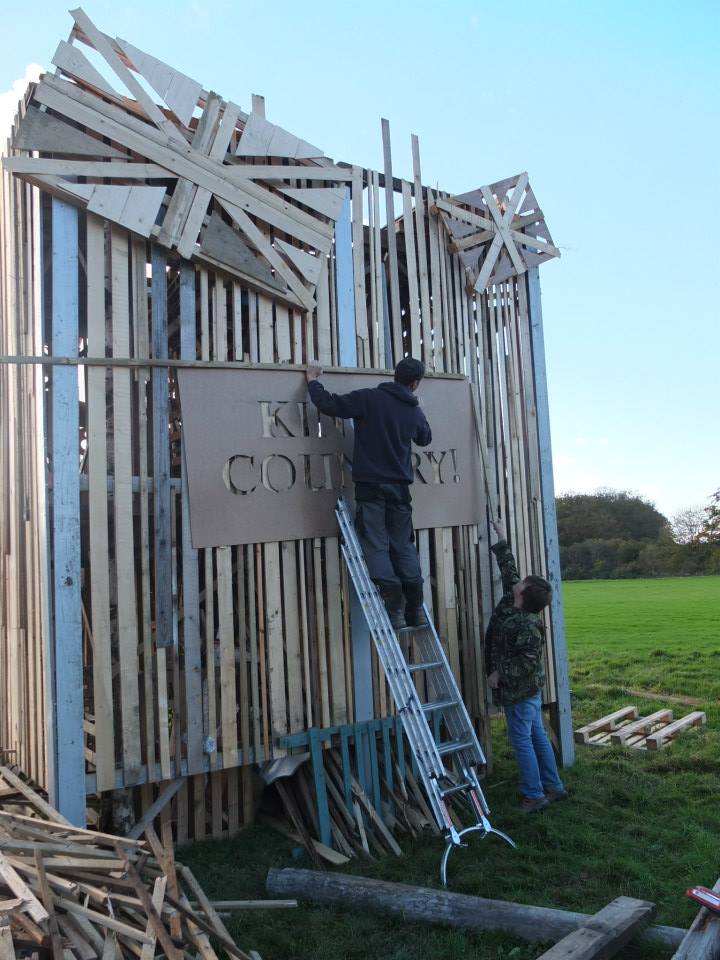 Tim and David fixing the banners that HP had created earlier.

The main body of the fire is very nearly done now.

The soldiers are now the focus- they're are well underway- but they are taking so much head scratching that they are still a little way from being completed.

Here's how the fire looks now 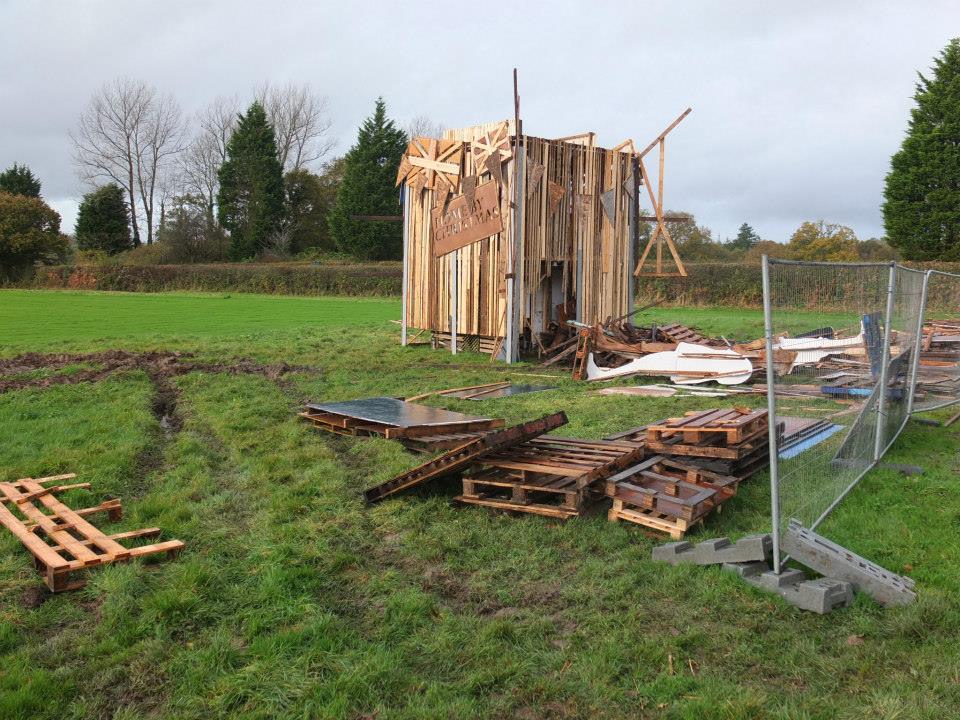 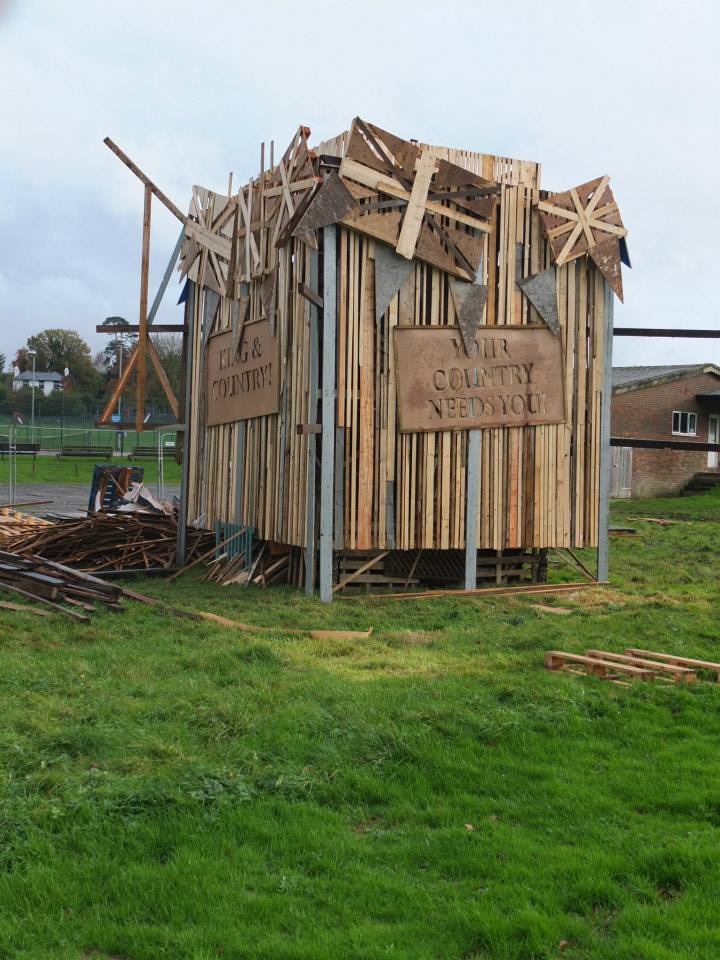 Well, like this but with a moat around it, I expect....

Tim, Charlie and I are meeting Mike this evening at the fire site. who is bringing us a huge projector to play with. Which I hope with the lighting, will be installed and ready to go at dusk this Thursday (6th)

Sadly didn't get the fire quite finished today so no projection show. We will try again for tomorrow night, from dusk.

Well what a weekend, heavy rain failed to dampen our night- although the fire took a bit to get going! It has been so busy since Friday- this has been the first time I've had to get in front of a computer. We met Friday morning to carry on with the build the men survived the high winds of Thursday night, which gave me the confidence I needed to know they would safely survive until they are burnt on Saturday night.

Jim Holden came down a took some photos as we lifted the men on Thursday. 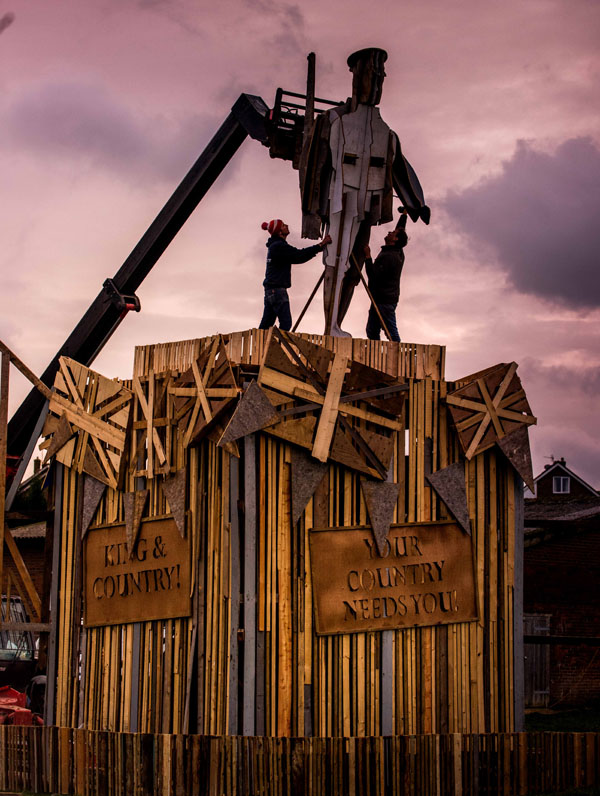 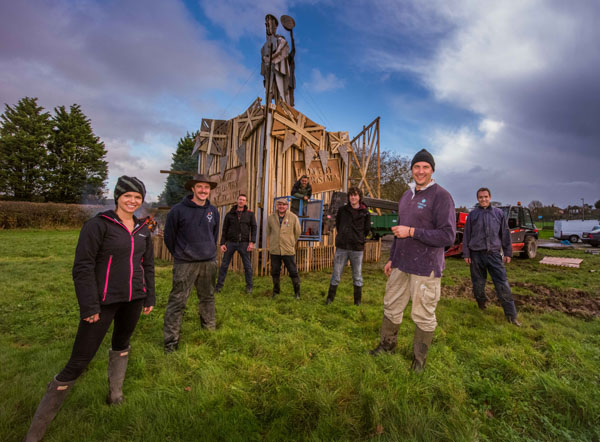 Just some of the team: Debbie, Mike, Justin, Ron, Robert, Sam, me and Tim. 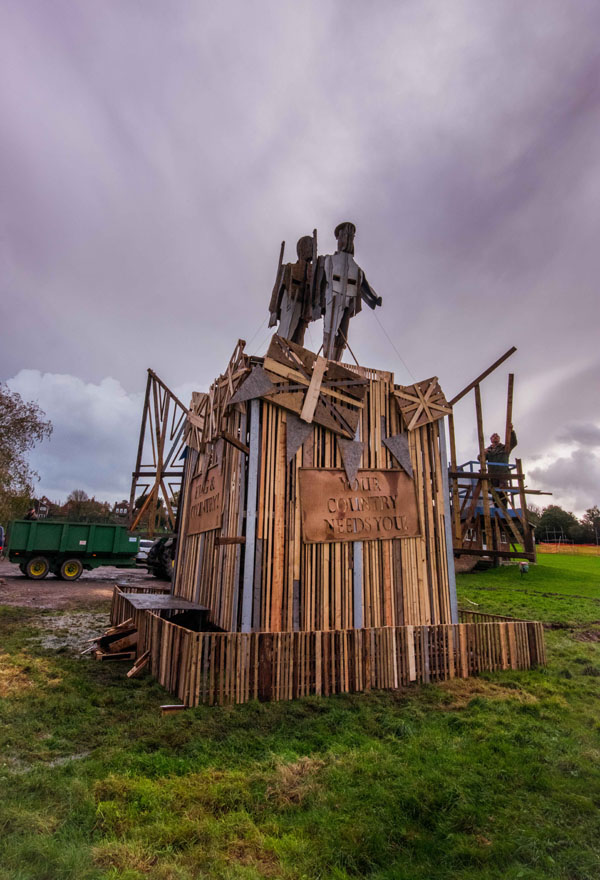 More photos of our evening from Jim HERE

We had a little time Friday afternoon waiting for the light to fall so we could set up the projector- Justin took these great photos- which included him being hoisted incredibly high in the fore loader that Pat Martin had lent us for the build- which led to the best bonfire selfie! 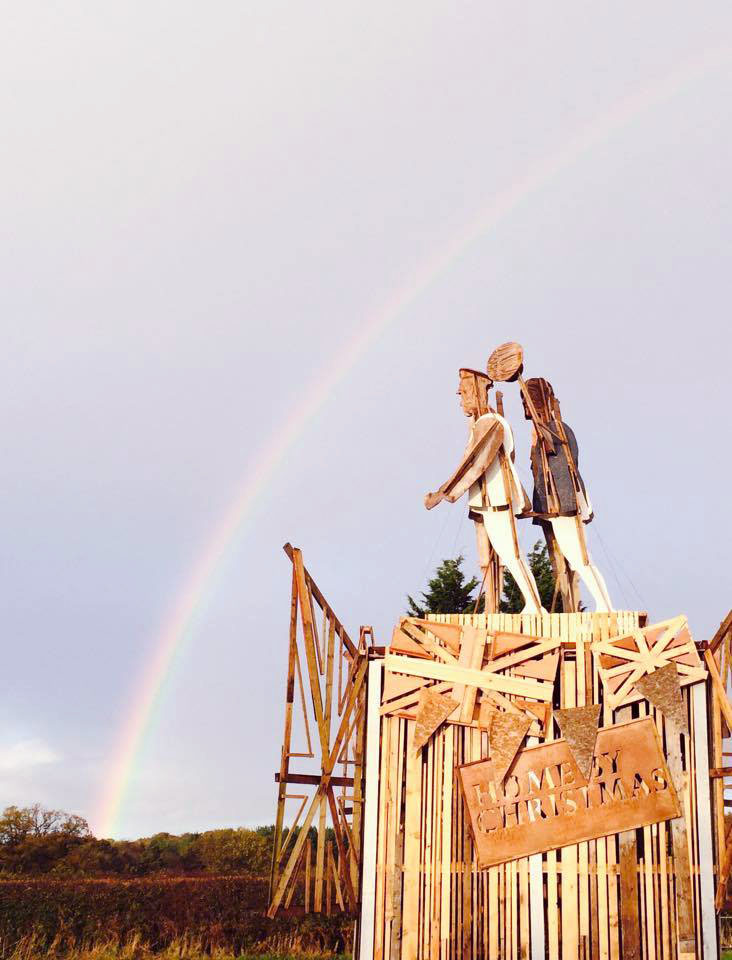 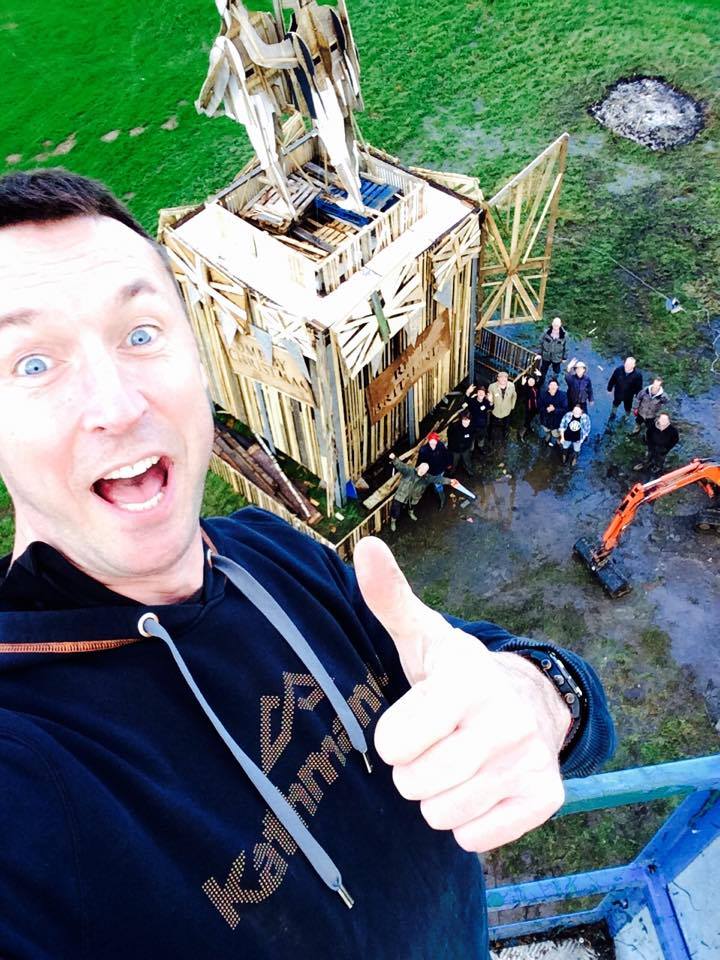 Other than Justin, you can see Ray, Trevor, Sam, Mike, Ron, ? Charlie, me, Bryony, Tim, Tony, Shaun and Andy.

I've only seen one film of the projection show, taken by Hattie Kennedy- you can see that HERE (thank you Hattie)

I would love to see your films/ photos of the finished bonfire, please email if you have any you'd like to share.

I'm glad to say it burnt beautifully (if a little slow to get going), I have seen a fantastic slow mo of the burn I'll share the link to that as soon as I get it.

Slow mo HERE many thank Alex, for sending it through.

So that is it another year draws to a close;

massive thanks to everyone that lent a hand- the bonfires are built without a budget so it relies completely on peoples generosity both with time, tools, materials, plant and kit. The guys that turn out and help- are all incredible- I am so grateful for their help- thank you all....see you next year!