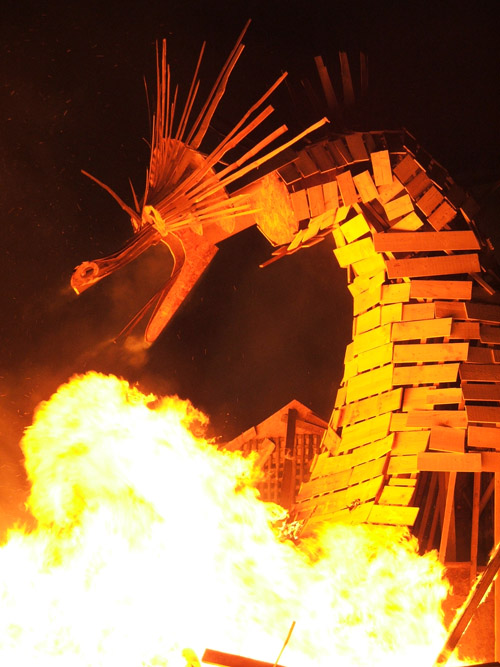 Going to keep a blog of this years East Hoathly bonfire sculpture progress.

7th November 2011: I have had several people already ask about the meaning behind this years bonfire. So I thought I'd update the blog to give a bit more background to the sculptures and this years fire. This is the eighth year we've had a sculpted fire.

My earliest memory was the fire being built by a small team, a tractor and trailer. Travelling around the village collecting old furniture, garden rubbish, hedge and tree trimmings and anything else mildly combustible. During the 80's this was over taken by people travelling far and wide to indulge in a Fly Tipping Orgy. The fire grew to gigantic proportions and accumulated more and more unpleasant and unburnable refuse, until I suspect Beddingham Landfill would be the only competition we had for the volume of "disposal". Things eventually had to change, the Society was paying a fortune in skip hire to dispose of the ash (for ash read; tree trunks,  gas cylinders, sheets of melted glass, tin, metal of every description and bed and settee springs in a quantity that would make Furniture Village blush)

It was decided we would build the fire at the last minute and only use pallets. The difference was incredible instead of a smouldering pile of rubbish that would burn for several days afterwards and a mountain of waste that would take a herculean effort to shift, we had an intense hot fire that in the morning could almost be swept up and put into a waste paper basket.

After a few years watching the speed the pallet fire were built and feeling a little disappointed by the reduction in scale I started to wonder how we could develop it. It wasn't long before I suggested the sculptures.

Over the years the fires have taken lots of different forms (photo's of the sculptures can be found in the "Features" section of my web site) and have had a variety of inspirations; anniversaries of historical events, the Parish Priest's sermon at the Remembrance Service, even Chris Evans on BBC Radio 2's breakfast show. This years was simply the offer of a 12' sailing dingy. A parishioner came to see me during last years bonfire build and asked if I wanted an old boat to put on the fire. I asked if she could hold onto it for me 'til this year. My first thought was to make a scale model of a galleon, perched on top of a huge whales spout. this developed into the galleon being attacked by a mythical sea monster. I felt we could build more dynamics and excitement into that than a whale. So sorry to say no more reason than that!

If this is your first visit to this blog read on to see the building of this years bonfire: 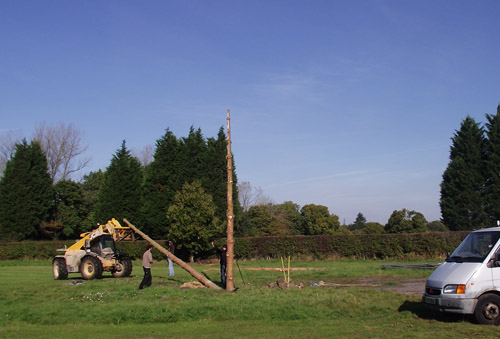 We started work last Saturday (22nd Oct) the holes were dug earlier in the week. My friends and fellow East Hoathly Society members James and Mike had a digger in the village, which made that job a bit easier! The posts were delivered, they had been cut down at Hesmonds Stud, as ever my mate Colin came up with the goods. Lifting the poles was made easy by Rowan in the Crouches Farm JCB. 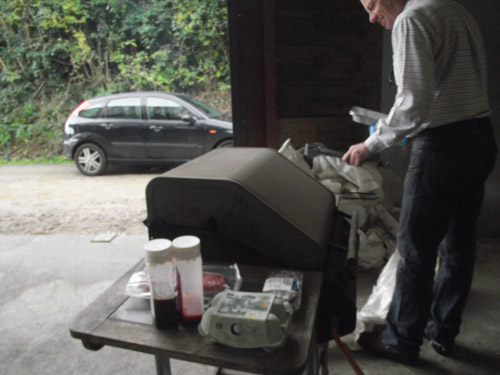 The 28th of October: bonfire build was greatly improved by Charlies culinery skills, bacon rolls (even with black pudding) was greatly appreciated! 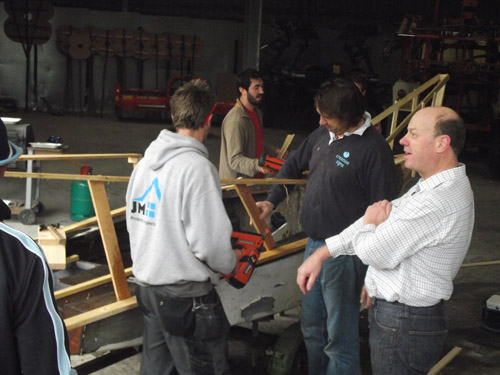 I'm not going to reveal what we're building just for now, but here is some of the team working off site, preparing a feature of the fire. We shall trailer this down to the playing fields in the morning. 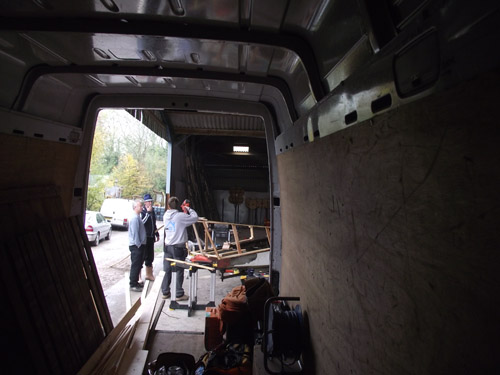 We did have a really successful morning everything acheived. Tomorrow will see this feature lifted to the top of the fire. The rest of the sculpture will then be built top down. 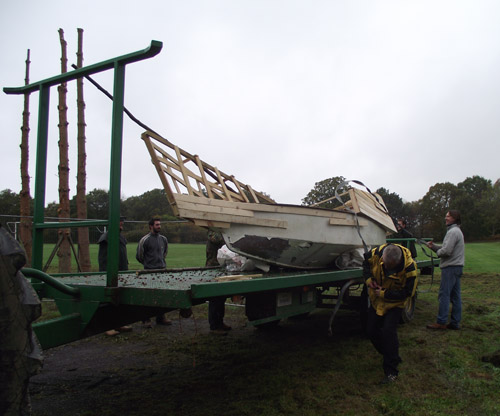 Sunday 30th October. The day starts when the detail we put together yesterday arrives on tractor and trailer 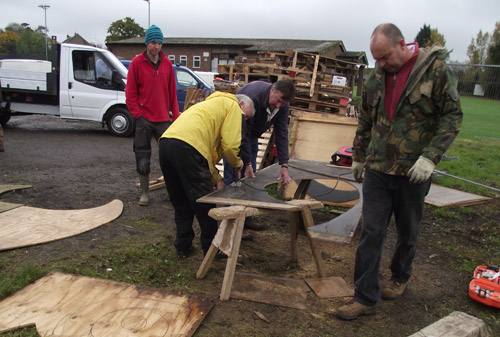 We have had lots of society members out this morning helping, in this shot is Tim, Trevor, Ray and Ron. They're jigsawing out details that will be applied to the sculpture next weekend.

The JCB lifting the boat into place. 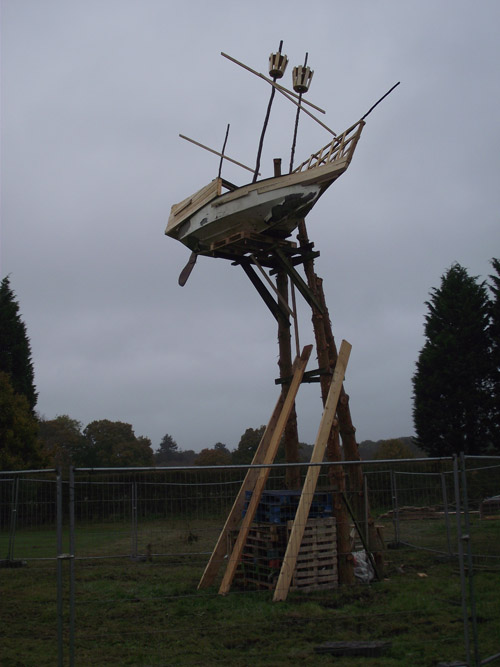 And this is this weekends progress. You've heard of a ship in a bottle, well we've got a ship on a stick! Got a lot done today, was hoping to be a bit further ahead, which means more to do next week. Still we have acheived the difficult bit of getting the galleon up and secured. I'll update the blog next weekend. Thanks for reading. 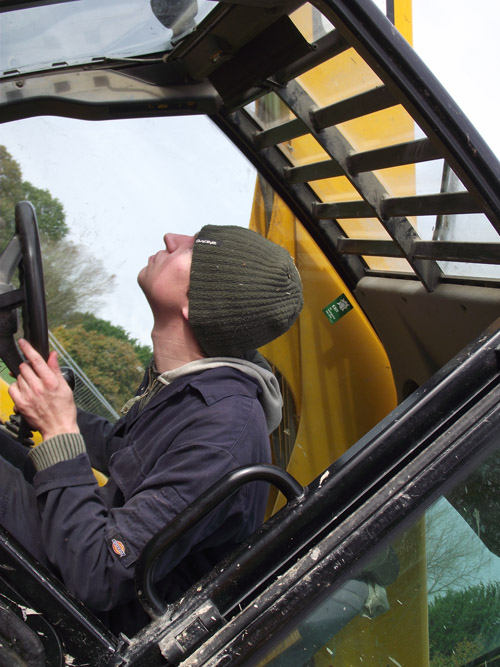 5th November 2011. The morning started a bit slowly, poor Rowan was struggling with the effects of having his wisdom teeth out. With my usual sympathy, I told him to get on with it. 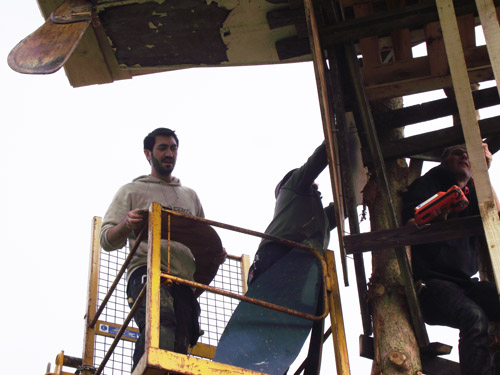 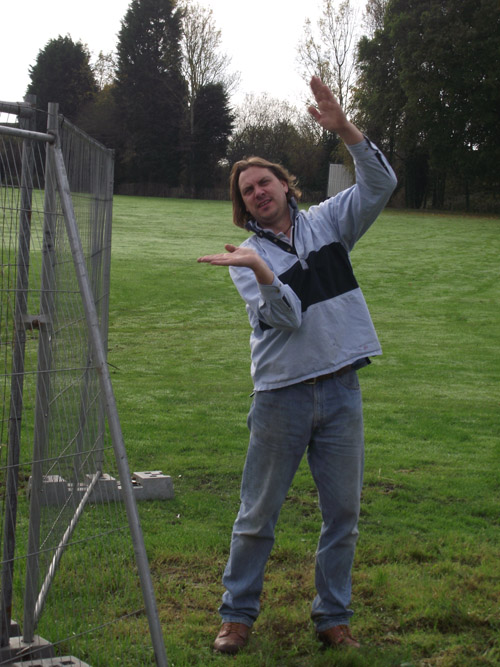 Me, directing Rob and Baldy. Trying to position the eyebrow (do sea monsters have eyebrows?) 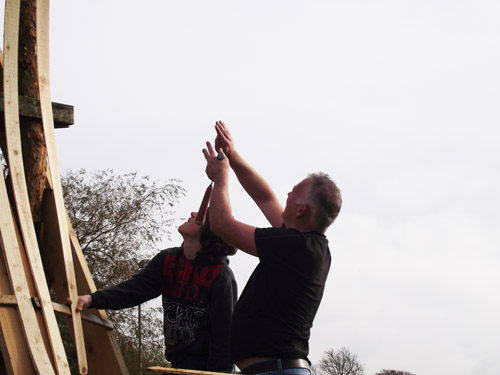 Tony and Sam working with Nick on the belly of the beast. 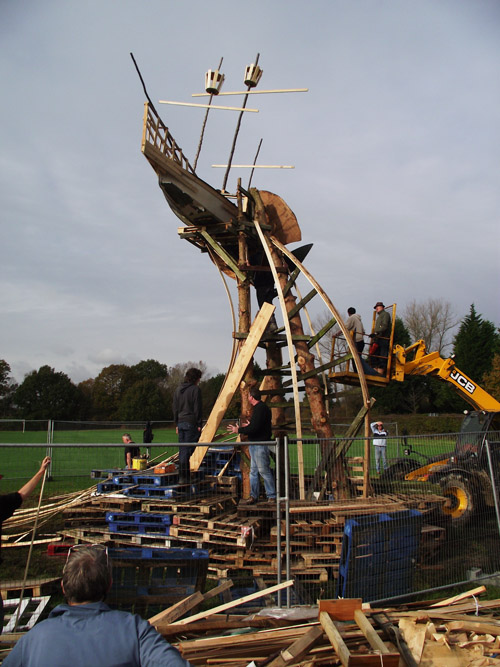 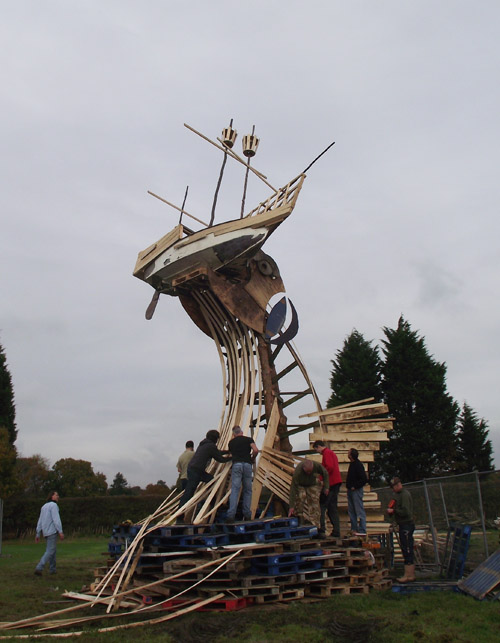 However it was a very successful morning. Lots done. I'm really hopefull we'll be able to get done tomorrow. 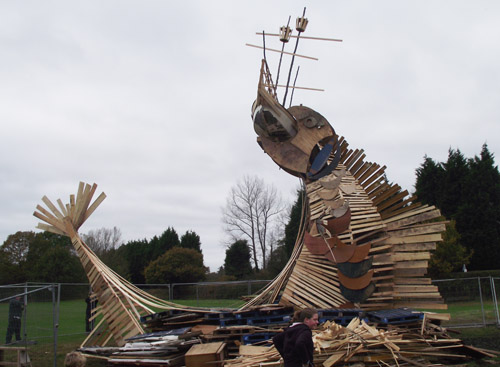 6th November 2011. An excellent mornings work. Even if there were a few absenses (noteably Rob, Tim and Ray) due no doubt to hangovers from a night in Lewes!

I have been trying to get the sculpture finished the weekend before our night for 3 or 4 years, finally we have acheived it. We have got a little more work to do, a bit of tidying and installing the electric illumination, but that can wait 'til Thursday now.

Will post anymore developements and try and get hold of photo's as it's burnt on Saturday. 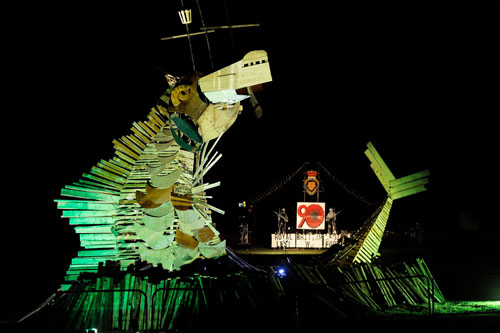 The bonfire with just a few hours left before it was consumed by the flames. Shown in its full glory illuminated by my good friend Tim helped by Alex (allegedly!). This pic was taken and given to me by the legend that is Jim Holden, more photo's of the evening:

Happy to report it burned magnificently, the galleon very briefly ressembled the Flying Dutchman as it pluged in to the heart of the fire- if anyone does have photo's of it burning I'd love to see them.