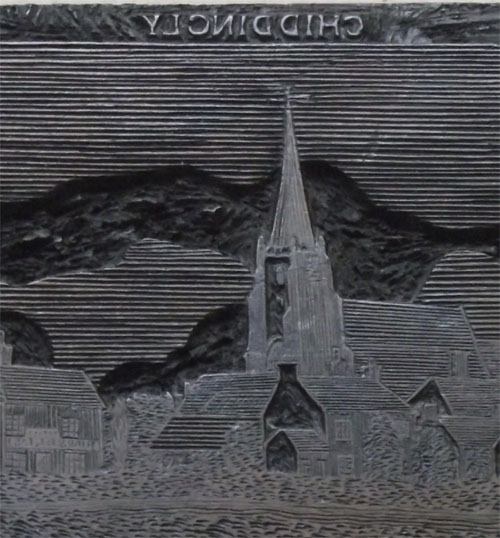 It is funny what can exist around us of which we have no knowledge.

A lady who I have known of for many years and lives in neighbouring Chiddingly, popped into to see me this morning.

She annouonced her Great, Great Uncle; Albion Russell, was a wood engraver. She then promptly produced two wood blocks.

As far as she new: Albion served an apprenticeship at Baxter's Printers of Lewes (though this couldn't be verified a Baxter's suffered a fire which destroyed their archives), before giving engraving up to return to his fathers business of Boot Maker in Chiddingly. He became such a success that eventually in 1861 he was able to return to Lewes to open his own shop. The business he created - with a new forged partnership formed in 1873 with George Bromley still continues today as the nationwide Russell & Bromley.

Albion was born in 1821, and the first engraving is dated 1837 and features his maternal home and the imposing spire of Chiddingly church. His home is clearly identified by the Fascia, proclaiming his Fathers business. It is not too far fetched to imagine the young Albion did this block as a practise piece during a home visit early in his apprenticeship. This theory is given weight by what is on the reverse of this block- Another engraving of the same view but dated 1840 -I've never heard of engravings doubled up like this, evidence perhaps of the precious block remaining in his possession for those years. The 19 year old Albion has matured (and possibly qualified)as an engraver. The engraving is much more subtle, with a wider range of mark making with much more control and a heightened sense of perspective giving the scene a greater detail and depth. Both engravings are clearly influenced by the progress made by the great engraver Thomas Berwick, who's influence is so still evident even today. However Albion's two nineteenth century village scenes still retain a painterly quality lost to the trade engravers of the later part of the century. It is interesting to note how his fathers business has done over the intervening 4 years. Another house and workshop has been added to the row and 'Russell's' have now moved next door to the new property his father has built. Mr Russell himself is featured in the foreground with his dog wearing his stove pipe top hat viewing his own flock of sheep.

The second block and third engraving is of the magnificent Jefferay monument found in Chiddingly's church. This engraving is exquisitely worked with a lovely balanced light and shade. The block is polished and worn with use, much more so than the other two engravings. is it fanciful to image he was visiting his home village to record the monument for a Baxter publication and took the opportunity to 'redo' the original scene with his now confident 'qualified' hand? 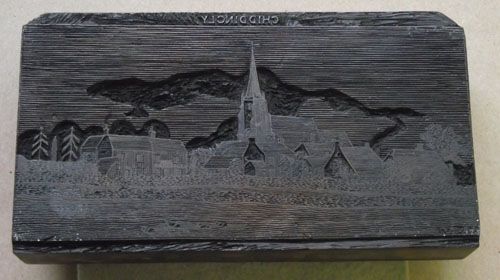 Chiddingly as seen by the 16 year old Albion. Note his father's house and shop to the left of the church, the right hand cottage, with a shop fascia 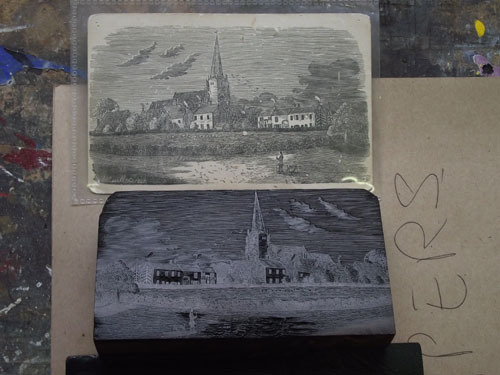 And 4 years later a much more confident version. Note the extra house now added to the row of cottages, with 'Russell's' moving into the new shop. And the figure in the foreground reputably Albion's father. In the photo I've included a print taken from the block. Sadly at some point the earlier engraving has been used as a post card, and to enable a row of manoeuvrable type to be added beneath the print and to allow it all to fit on a standard postcard a slice had to be taken off of the block, so the later block has lost it's bottom with the beautiful looping signature of Albion. 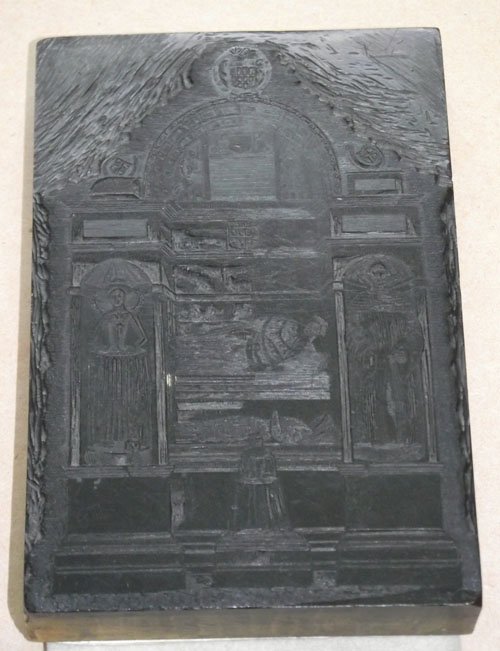 And the beautifully executed Jefferay Monument, I wonder if anyone knows of this illustration existing in a contemporary Baxter publication?.